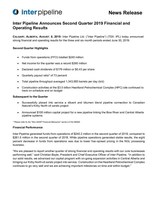 Subsequent to the Quarter

"We are pleased to report another quarter of strong financial and operating results with our core businesses performing well," said Christian Bayle, President and Chief Executive Officer of Inter Pipeline. "In addition to our solid results, we advanced our capital program with on-going expansion activities in Central Alberta and bringing our Kirby North oil sands project into service. Construction on the Heartland Petrochemical Complex continues to go very well and we are achieving important milestones on time and within budget."

For the second quarter of 2019, Inter Pipeline's four business segments generated funds from operations as follows:

In the second quarter of 2019, corporate costs, including employee, financing and tax expenses were $58.1 million compared to $55.4 million in the same period of 2018.

Inter Pipeline's payout ratio* for the quarter was 73.1 percent.

Inter Pipeline transported an average of 1,158,100 b/d during the quarter, a decrease of 23,200 b/d compared to the same period in 2018. Average volume on the Polaris pipeline system increased on higher diluent deliveries to the Kearl and Hangingstone oil sands projects. Volume on the Cold Lake and Corridor pipeline systems decreased as a result of the Government of Alberta's oil production curtailment program and various third-party operational matters. Cash flow from this business segment is underpinned by a variety of long-term, cost-of-service contracts and is not materially impacted by throughput volume fluctuations.

NGL processing funds from operations were $72.1 million for the second quarter of 2019. This represents a decrease of $29.2 million from the second quarter of 2018 primarily due to lower frac-spreads. Paraffinic frac spreads within the offgas processing business were particularly impacted by low North American propane pricing and Alberta butane pricing.

Natural gas processed at the Cochrane and Empress straddle plants during the quarter increased to 3.17 billion cubic feet per day, an increase of approximately 130 million cubic feet per day over the same period in 2018. Approximately 101,300 b/d of ethane and propane-plus was extracted during the quarter, an increase of 16,100 b/d compared to the second quarter of 2018. Average sales volume from the Redwater Olefinic Fractionator (ROF) increased to 32,600 b/d in the second quarter, up 17 percent from 27,800 b/d in the same period of 2018.

In the third quarter of 2019, Inter Pipeline has planned turnaround activities at ROF, Pioneer I and II offgas plants which coincide with turnarounds at the Suncor and Horizon upgraders. This will affect offgas sales volume in the quarter.

In the second quarter of 2019, $287.1 million was invested in the Heartland Petrochemical Complex, with the total capital incurred on the project at approximately $1.6 billion.

Construction and fabrication activities at the $3.5 billion Heartland Complex continued to advance in Strathcona County, Alberta during the quarter with all heavy-lift vessels for the propane dehydrogenation facility now in place. By the end of the second quarter more than 1,200 construction personnel were on site, and HPC construction activities continue to progress according to cost and schedule targets.

In total, approximately 55 percent of the total project costs have been secured under completed time and materials work, firm purchase orders and lump sum construction contracts.

Inter Pipeline's conventional oil pipelines business segment generated funds from operations of $49.6 million, an increase of $1.4 million compared to the same period in 2018 as a result of higher midstream marketing activities and lower operating expenses.

Volume on Inter Pipeline's three conventional gathering systems averaged 184,900 b/d for the second quarter of 2019, compared to 196,400 b/d in the second quarter of 2018. Volume on the Central Alberta pipeline system increased by 10 percent to 29,200 b/d due to new sweet crude batching activities that began in the second half of 2018. Bow River volume increased by 15,200 b/d or 19 percent to 97,300 b/d primarily due to higher producer activity. Volume on the Mid-Saskatchewan pipeline system, while relatively consistent in 2019, decreased 29,400 b/d quarter over quarter due to increased competition in the region and downstream apportionment issues.

At the beginning of August 2019, Inter Pipeline announced it has begun construction on 75 kilometers of new eight-inch diameter pipeline that will connect Inter Pipeline's Throne Station on the Bow River pipeline system to the Central Alberta pipeline system in the Stettler area. The $100 million project is the second phase of a multi-phased approach to infrastructure development for Inter Pipeline's conventional pipeline business in the region. When completed, Inter Pipeline forecasts throughput volume of 10,000 to 15,000 barrels per day (b/d) on the new pipeline, with approximately one third of forecast shipments currently secured for a 10-year term.

Inter Pipeline's bulk liquid storage segment generated funds from operations of $26.9 million in the second quarter of 2019, compared to $17.4 million in the second quarter of 2018. These favourable results were aided by the recently acquired storage business in the United Kingdom and the Netherlands, which operated at a 96 percent utilization rate.

Overall, average storage utilization rates during the second quarter were 83 percent compared to 84 percent for the same period a year ago, and 78 percent in the first quarter of 2019.  Customer interest continues to improve, particularly in our Danish operations, and as a result, July utilization rates across all European terminals rose to 90 percent.

A Inter Pipeline will hold its second quarter 2019 financial and operating results conference call and webcast on August 9 at 9:00 a.m. MT (11:00 a.m. ET) for interested shareholders, analysts and media representatives.

About Inter Pipeline Ltd.
Inter Pipeline is a major petroleum transportation, natural gas liquids processing, and bulk liquid storage business based in Calgary, Alberta, Canada. Inter Pipeline owns and operates energy infrastructure assets in western Canada and Europe. Inter Pipeline is a member of the S&P/TSX 60 Index and its common shares trade on the Toronto Stock Exchange under the symbol IPL.  www.interpipeline.com 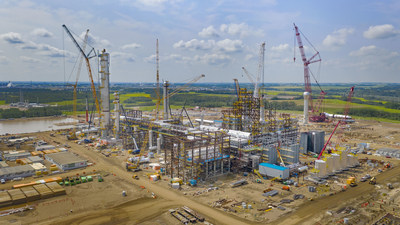