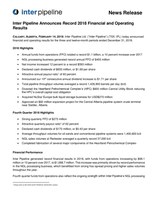 Inter Pipeline generated record financial results in 2018, with funds from operations increasing by $98.1 million or 10 percent over 2017, to $1,088.7 million. This increase was primarily driven by record performance in the NGL processing business, which benefitted from strong frac-spread pricing and higher sales volumes throughout the year.

Fourth quarter funds from operations also reflect the ongoing strength within Inter Pipeline's NGL processing business, reaching $273.3 million, up approximately $5.5 million compared to the fourth quarter of 2017. NGL processing FFO during the quarter increased to $120.1 million, up 32 percent over Q4 2017 due to higher sales volumes and frac-spread pricing.

"Furthermore, the record performance of our NGL processing franchise positioned us to re-invest significant cash flow back into the business, most notably for the ongoing development on the Heartland Project.  Inter Pipeline also remained committed to returning meaningful payments to shareholders, increasing its dividend last November for the 10th consecutive year."

Corporate costs including employee, financing and tax expenses for the three and twelve months ended December 31, 2018 were $37.5 million and $209.6 million, respectively.

In 2018, dividend payments to shareholders were a record $655.4 million or $1.685 per share, resulting in an attractive annual payout ratio of 60.2 percent. In November, Inter Pipeline announced its 10th consecutive annual dividend increase to $1.71 per share annually, representing an increase of $0.03 per share. Inter Pipeline's current monthly dividend rate is $0.1425 per share.

In the fourth quarter, Inter Pipeline declared dividends of $169.7 million, or $0.425 per share, resulting in a quarterly payout ratio of 62.1 percent.

NGL processing generated record annual funds from operations of $454.8 million, a $175.2 million increase over 2017. In the fourth quarter of 2018, this business generated $120.1 million in FFO, a 32 percent increase over the fourth quarter of 2017. These results were positively influenced by increased frac-spread pricing and strong sales volumes in both our natural gas and offgas processing operations.

Annual natural gas flows to the Cochrane and Empress straddle plants increased 22 percent compared to 2017. In aggregate, approximately 3.3 billion cubic feet per day of natural gas was processed, extracting 102,100 b/d of ethane and propane-plus. Average sales volumes from the Redwater Olefinic Fractionator increased 10 percent over the same period a year ago, to a record 32,500 b/d during 2018.

In 2018, Inter Pipeline's Heartland Petrochemical Complex reached significant milestones with total incurred spending for the project surpassing $1 billion in the fourth quarter. Installation of modular components of the propane dehydrogenation (PDH) plant and fabrication of major vessels were completed on schedule and budget. Inter Pipeline also divested the $600 million Central Utility Block, which provides steam, power and other utilities to the complex, significantly lowering the total capital cost obligation.

Funds from operations for Inter Pipeline's conventional oil pipelines business segment were $177.6 million during 2018, down 17 percent from 2017. This is primarily the result of weaker performance in the fourth quarter.

Total throughput averaged 201,100 b/d in 2018, down modestly from 2017 results.  Volume increases on the Central Alberta pipeline system were offset by declines in throughput on the Mid-Saskatchewan pipeline system.

Funds from operations for the quarter were $24.9 million, down approximately 50 percent from the comparable quarter in 2017. Increased competition and downstream apportionment issues reduced throughput volume, which negatively impacted quarterly results. In addition, the unprecedented widening of crude oil pricing differentials in November and December also affected midstream marketing activities.

During the fourth quarter Central Alberta pipeline throughput increased 25 percent over the same period a year ago to 32,300 b/d and Bow River volume also rose approximately nine percent to 95,600 b/d. Mid-Saskatchewan volumes declined 38 percent to 56,300 b/d in comparison to the fourth quarter of 2017.  Approximately two-thirds of the decline was due to competition from another feeder pipeline with the remaining volumes impacted by downstream apportionment issues.

Earlier in 2018, Inter Pipeline announced plans to construct an $82 million expansion of its Stettler Crude Oil terminal. The project continues to advance according to cost and schedule targets and is expected to enter service in phases beginning in mid-2019. When complete in mid-2020, the terminal will be able to service growing production from the East Duvernay light oil basin and other emerging oil plays in Alberta's south-central region.

As expected, funds from operations in Inter Pipeline's bulk liquid storage business were down from $97.6 million in 2017 to $65.9 million in 2018. Storage demand for certain petroleum products in Europe continued to be impacted by a backwardated commodity pricing environment. Average utilization rates during 2018 were 77 percent compared to 96 percent in 2017.

Funds from operations for the quarter were $15.0 million down from $20.9 million in 2017. On November 30, 2018 Inter Pipeline completed the acquisition of NuStar Energy, L.P.'s European bulk liquid storage business for USD $270 million. The acquired business consists of seven high-quality storage terminals strategically located throughout the United Kingdom and within the Port of Amsterdam. Historically, these assets have generated stable cash flow that is underpinned by a variety of cost-of-service and fee-based contracts.

Utilization in the quarter averaged 68 percent across all terminals. Terminals in Sweden, the United Kingdom, the Netherlands and Germany all posted rates in excess of 90 percent. Unfavorable market conditions continued to impact Danish operations resulting in depressed utilization rates. However, recent contracts have improved rates, particularly in Denmark. Utilization rates rose to 78 percent across all European terminals in January 2019.

Inter Pipeline also announces that Mr. David Fesyk has resigned from its board of directors. Mr. Fesyk served as CEO of Inter Pipeline, and its predecessor companies, from 1997 to January 1, 2014, and he continued to serve on the board for five years following his retirement as CEO. Inter Pipeline and its board sincerely thank Mr. Fesyk for his outstanding contributions to the company's strong operational and financial performance while serving as an officer and director and wish him well in his future endeavours.