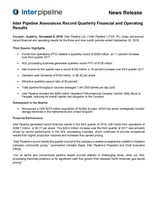 Subsequent to the Quarter

Inter Pipeline generated record financial results in the third quarter of 2018, with funds from operations of $299.7 million, or $0.77 per share. This $30.8 million increase over the third quarter of 2017 was primarily driven by record performance in the NGL processing business, which continued to provide exceptional results from higher production volumes and increased frac-spread pricing.

For the third quarter of 2018, Inter Pipeline's four business segments generated funds from operations as follows:

Inter Pipeline's payout ratio for the quarter was an attractive 54.5 percent.

The oil sands transportation business continued to produce reliable operating and financial results during the third quarter of 2018. Funds from operations were $150.3 million, a decrease of $5.1 million compared to the same period a year ago due to slightly lower capital cost recoveries.

Average throughput volumes increased by 80,100 b/d compared to the third quarter of 2017 to 1,227,200 b/d. Volumes on the Polaris pipeline system increased by 94,100 b/d or 60 percent to 251,000 b/d during the quarter. Strong volume growth continues to be driven by higher diluent deliveries to the Foster Creek, Christina Lake and Kearl oil sands projects.

NGL processing generated record funds from operations of $134.8 million, a $56.7 million increase over the third quarter of 2017. This result was driven by increased frac-spread pricing and strong production volumes in both our natural gas and offgas processing operations.

Natural gas flows to the Cochrane and Empress straddle plants during the quarter increased 20 percent compared to the third quarter a year ago. In aggregate, 3.1 billion cubic feet per day of natural gas was processed, extracting 97,700 b/d of ethane and propane-plus. Average sales volumes from the Redwater Olefinic Fractionator remained consistent with the same period a year ago averaging 32,300 b/d during the quarter.

During the third quarter, Inter Pipeline significantly lowered its capital cost obligation associated with the Heartland Petrochemical Complex by divesting the $600 million Central Utility Block (CUB) to Fengate Capital Management. Through the sale, Inter Pipeline recovered $53.5 million of development capital and is no longer responsible for funding construction costs associated with the CUB.

The Heartland Petrochemical Complex remains on schedule and on budget. Construction, equipment fabrication and procurement activities at the $3.5 billion Complex, excluding CUB capital costs, were significantly advanced during the quarter. Foundation work for the propane dehydrogenation facility as well as key components of the polypropylene plant were completed in the quarter. Fabrication of major vessels including the propane/propylene splitter and polypropylene reactor are in the final stages of completion at facilities in Edmonton, Alberta in preparation for the site installation program planned for early 2019.

Funds from operations for Inter Pipeline's conventional oil pipelines business segment were $53.8 million during the third quarter of 2018, consistent with same period a year ago.

Construction of the $82 million Stettler Crude Oil Terminal expansion, announced earlier this year, continued in the quarter.  This expansion will service growing production from the East Duvernay basin and is part of a broader strategy to position the Central Alberta pipeline system to handle new oil production for the south-central Alberta region.

This expansion is expected to enter service in phases between mid-2019 and mid-2020. Additional pipeline and facility investments may be required to support area production growth.

Inter Pipeline's bulk liquid storage business generated funds from operations of $14.8 million in the quarter, compared to $25.2 million in the third quarter of 2017. As expected, storage demand for certain petroleum products in Europe continued to be impacted by a backwardated commodity pricing environment.

Upon closing, which is scheduled for the fourth quarter of 2018, Inter Terminal's storage capacity will increase by approximately 33 percent to 37 million barrels and establish it as the largest independent storage operator in the United Kingdom.

Inter Pipeline continues to maintain a strong balance sheet with significant liquidity available on its committed revolving credit facility. As at September 30, 2018, Inter Pipeline had approximately $900 million of capacity on its $1.5 billion revolving credit facility and a consolidated net debt to total capitalization ratio* of 51.8 percent. This ratio has decreased from 53.5 percent as at December 31, 2017.

"Furthermore, should our strong financial performance continue, we may be in a position to suspend the premium dividend reinvestment program in relation to the financing of the Heartland Complex by the end of 2019. This would be roughly two years earlier than originally planned and would materially reduce the equity required to fund this investment before service commencement in late 2021."

Subsequent to quarter end, Inter Pipeline successfully completed a $200 million common share offering to support the funding of the NuStar Europe acquisition. Remaining financing for the acquisition will be provided by available capacity on Inter Pipeline's revolving credit facility. No third-party debt will be assumed under the terms of the acquisition.

Inter Pipeline is a major petroleum transportation, natural gas liquids processing, and bulk liquid storage business based in Calgary, Alberta, Canada. Inter Pipeline owns and operates energy infrastructure assets in western Canada and Europe. Inter Pipeline is a member of the S&P/TSX 60 Index and its common shares trade on the Toronto Stock Exchange under the symbol IPL.  http://www.interpipeline.com